Now Hear This: Drink Up!

If you know me personally, then you know this is pretty funny coming from me.  But I’m not laughing (as I turn up the volume on my hearing aids to hear the good news).  Uh-uh.  Coffee is serious business. 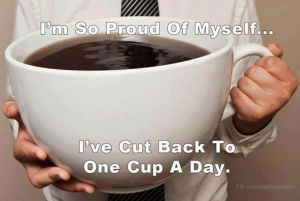 Not only is coffee good for your ears, but apparently it’s good for the rest of what ails you too:

“A study tracking the health and coffee consumption of more than 400,000 older adults for 13 years, and published earlier this year in the New England Journal of Medicine, found that coffee drinkers reduced their risk of dying from heart disease, lung disease, pneumonia, stroke, diabetes, infections, and even injuries and accidents.  (High blood caffeine levels in older adults linked to avoidance of Alzheimer’s disease,  8/5/14, Clinicalnews.org.)

Somebody call my doctor, quick!  He apparently is misinformed into believing that caffeine raises your blood pressure.  Silly man.

The above referenced Alzheimer’s study took place in Tampa, Fl, 6/4/12, (what better place to do it?), a collaboration between researchers from the University of South Florida and the University of Miami.  They found that higher caffeine levels in the blood were associated with avoidance of, and perhaps protection from, developing Alzheimer’s disease.  “Moreover, coffee appeared to be the major or only source of caffeine for these individuals”.

So, what exactly do they mean by “higher blood caffeine levels?”  Well, that’s a good question.

According to the news article:  “These intriguing results suggest that older adults with mild memory impairment who drink moderate levels of coffee — about 3 cups a day — will not convert to Alzheimer’s disease — or at least will experience a substantial delay before converting to Alzheimer’s,” said study lead author Dr. Chuanhai Cao, a neuroscientist at the USF College of Pharmacy (http://health.usf.edu/nocms/pharmacy/) and the USF Health Byrd Alzheimer’s Institute (http://health.usf.edu/nocms/byrd/).

But then later in the article:  “No one with MCI* who later developed Alzheimer’s had initial blood caffeine levels above a critical level of 1200 ng/ml – equivalent to drinking several cups of coffee a few hours before the blood sample was drawn. In contrast, many with stable MCI had blood caffeine levels higher than this critical level.”  (*mild cognitive impairment)

Hmmm… so several cups of coffee is below the critical level?  Then, does “several cups” mean 2 cups?  Because it would have to, wouldn’t it, in order to jive with the statement that 3 cups a day will protect you from the disease?  “… In contrast, many with stable MCI had blood caffeine levels higher than this critical level.”

I don’t know; these statements appearing conflicting to me.  But I’m betting that whatever the “above critical level” is, I’ve got it covered.

This is the problem with news articles.  This one is the journalists attempt to compile summaries of more than one study and cram as many references as possible into it in order to make it accurate and professional.  Or at least appear accurate and professional.  Not this journalists fault, I’m doing the same thing with this post.  But the process does sometimes unintentionally drift into unclear territory.

(As a side note, I have to wonder if anyone’s ever done a study on the link between Alzheimer’s, increased caffeine consumption and Florida’s vehicular crash statistics.)

Nevertheless, the message coming across is consistent.  If you want to head off Alzheimer’s, drink more coffee:

“Moderate daily consumption of caffeinated coffee appears to be the best dietary option for long-term protection against Alzheimer’s memory loss,” Dr. Arendash said. “Coffee is inexpensive, readily available, easily gets into the brain, and has few side-effects for most of us. Moreover, our studies show that caffeine and coffee appear to directly attack the Alzheimer’s disease process.”

And since the study also points out that neurodegenerative diseases (like Alzheimer’s) actually start one or two decades before the symptoms become apparent, the sooner you start drinking that coffee the better.

Hey… I don’t need a light bulb over my head to do that!  I heard that message a long time ago.