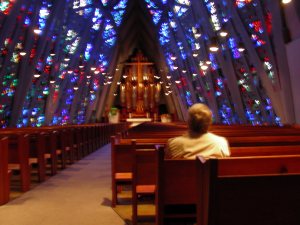 Sometimes I feel like I’m surrounded by ignorant people.  Sometimes being this morning, actually.

Logically, I know it’s not true.  In truth, I don’t think I’ve ever even met an ignorant person, so how could I be surrounded by them?  We all have subjects which we’re ignorant of, but that’s not the same thing as someone who is ignorant.  Plus, our definitions of intelligence are 1) subjective, and 2) frequently prejudiced.

No, being surrounded by ignorant people is only a feeling I get, born out of frustration during those times when I don’t get the co-operation I think I should, from people whose co-operation I need.  (Usually, it has to do with things like: doctors who don’t listen to what I’m saying or who don’t treat my family members with that same courtesy, contractors who take advantage of my ignorance and do a lousy job, etc.)

I’m sometimes told my own judgment could be suspect in these cases.  Or, as Hubby would so aptly put it, “You just get upset when people don’t see things your way.”  (aka: too controlling).  Leave it to Hubby to tell me the truth.  (“Ha!” she answers defiantly.)  This was the case last night (and again this morning) when I expressed frustration with the “ignorant” someone who frustrated me.

There’s just enough little girl in me to wish my dad was still here.  If Dad was here, he’d know what to do.  I’ll never forget when I was in my early twenties and I made some derogatory remarks to my Dad about one of his friends…

My parents were part of a coffee clutch that met at a local restaurant.  It was a fairly large group – probably 15 or more people – and several hours every morning the members would drift in and out of the restaurant, sit at a long table, eat breakfast and chat with each other before they had to leave for their jobs.

I was a college student at the time, and sometimes ate breakfast with the clutch before I went to classes, always finding it interesting how diverse my parents friends were.

There was the beautician who owned the beauty shop next door to the restaurant.  She’d stop in around 9 a.m., order coffee and dry toast and spread local gossip she’d hear from her customers.

There was the manager of the hardware store… a disgruntled fellow who came (and went) early, since his store was clear across town and traffic could get bad.  And the high school teacher, who ran into job trouble when the school district found out he was gay (this was back when “coming out of the closet” wasn’t fashionable).

I remember one fellow who was quite handsome.  He had exquisite Greek features, attractively styled hair just barely frosted with gray, and he was always impeccably dressed.  He was the owner of a men’s clothing store, my dad bought many of his expensive office suits from that man.  Rumor had it that he had a penchant for cheating on his wife.

As for my dad, he was an executive for –  now that I look back onto it – probably one of the largest employers in the area.  A national corporation whose headquarters were in Stamford, Connecticut.

This coffee clutch was, basically, an interesting representation of the townspeople.  They ranged in age from thirties to retired, women and men alike with varied livelihoods, interests, religion, and political opinions.  I loved being a part of the clutch whenever my schedule permitted it.

One of the clutch members, however, was someone I really looked down on.  His name was Al and he was a retired farmer who lived on the outskirts of town.  To fill his time he did odd jobs for friends and family.

At the time, my dad was a controller.  (No, that is not a description of his personality… it’s the title of a top managerial financial person, responsible for all the financial/accounting related activities within an organization.)  A numbers man.

When our back yard fence needed repair, or the garage door opener jammed up, Dad would try his darndest to fix these things, but mechanic’s was definitely not his forte.  His fingers worked fine on a calculator but when it came to home repair, he was all thumbs.  Instead, he came to rely on Al.

To look at Al was to look at the stereotype of the typical “backwoods” farmer.  He wore denim bib overalls, long-sleeved shirts and dirt encrusted work boots.  He drove a small, dented pickup truck.  His thinning gray hair always looked like it needed to be trimmed.  He had a missing tooth and a rough, grizzled manner.

I thought Al was the most poor, worthless, uneducated man I’d ever met.  As I said, I was college age.  (We all remember how “smart” we were at that age, right?)  I don’t remember exactly what my disparaging remark about Al was, but I do know it included the words “dumb” and “poor”.  My dad became very angry.

“Al has more money than any of us up at that restaurant,” he said.

My eyes grew wide in surprise as Dad went on to explain.  Turns out that – in exchange for fixing things around our house – Dad did Al’s taxes and helped him with his accounting.  Something I hadn’t known.  Al had no college degree, but he was a savvy, shrewd business man who, as a result, was very wealthy.

He knew what his area of expertise was and he knew how to capitalize on it.  So much for “ignorant”!

After Dad “educated” me, I was more respectful of Al.  Money talks, I suppose, but mostly it was because I saw my dad as a smart man, so if Dad thought Al was smart, then he must be, and I had judged prematurely.

So here’s the thing about dealing with “ignorant” people… do we get upset because people disrespect us?  Or do they know something we don’t?  Certainly you need co-operation (or at the very least, explanation!) when it comes to people you receive services from.  Such as doctors.  (My source of irritancy was a doctor, of course.  I should qualify here that I have a profound distrust of doctors.  My paranoia of them is probably deserving of some serious therapy.)

Well, I can’t quite let go of my frustration yet.  But I am willing to take a step back and try not to control the situation every time I step into a doctor’s office.  To admit that I could be reacting more to how I think the doctor perceives me than I am to why we went there in the first place.  After all, it’s at least a possibility he may actually know what he’s talking about (that’s cheeky, isn’t it?).

It’s practically impossible to know what someone else thinks of you, and dangerous to base your reactions on what you think those opinions might be.  I have no idea what knowledge or experience that doctor has had that, added to my own experiences, lead to our lack of communication.  What kind of a day he had or  what his emotional, spiritual, or physical state was at that moment.  What I do know is that I doubtless could’ve gotten more co-operation if I’d handled it better.  Tried a different approach, instead of just reacting from expectation.

My dad’s not here to set me straight anymore, so I have to figure these things out without him.  But I like to think that God has appointed Dad to keep an eye on me.  To help me, by bringing to light memories from our past.  I think of my dad as more of a disciplinarian than I do God, so that thought may not be enough to always keep me from reacting first and thinking later…  but it is enough to give me pause.

After all, it’s not just a loving, forgiving God watching over me.  Dad might be watching too.