Valentine’s Day elicits strong feelings in people – positive and negative.  There’s the V-Day haters (who’ve had bad relationships or feel pressure because they aren’t currently in a relationship), and the V-Day lovers, (who go about annoying all the haters by declaring how wonderful love is).

I confess, I’m in the lover group, and I live with a romantic man (Mr. Romantic), so there’s no ignoring V-Day even if I wanted to.  Which I don’t.  So sue me.  I believe in love.

Nevertheless, I haven’t always been happy in love, nor have all my relationships been good.  Some have been pretty darn awful, and I’ve put in my time feeling irritated with the whole February 14th “rubbing my nose in it” day!

Plus, as I’ve said before, I think our modern Valentine’s Day is harder than ever on couples (see Love Is Harder Online).

But all that aside…  does anyone even know how this red-filled, expensive card, long-stemmed roses, dinner out, pressure to express our love event even started?

According to the “experts” (whatever that means), apparently not!

Ask most people and they’ll tell you it’s because of Saint Valentine.  But did you know there was more than one Saint Valentine?  I sure didn’t.  Until I looked it up.  No one seems 100% certain which saint it was.  Not to mention that the stories of how it all started are just that… legends… about priests performing forbidden weddings, doing miraculous healings, and spreading the gospel of Christ.

Then there’s the folk traditions and various customs that link Saint Valentine’s with the advent of spring.  One earth-type version has Saint Valentine doing something mystical with the roots of plants, and causing the season’s new growth.

They weren’t all priests either… there’s a ‘Jack’ Valentine that left sweet treats for children at their back doors.  Not sure why he did this, but apparently the kids were scared of him.

My favorite story is that Valentine’s day is when the birds sing songs of love to each other, pick their forever mates and get married.  S-tweet!

It’s not all just about romantic love either.

In fact, romance didn’t seem to be the main focus in most of the origins surrounding the celebrations.  Even now, not every country relates the day with romance.

Some interesting facts, according to Wikipedia:

Estonia and Finland translate Valentine’s Day into “Friends Day”.  It’s about showing your friends how much you appreciate them.  In Iran, it’s a festival that combines a celebration of the earth with love towards mothers and wives.

Valentine’s Day is illegal in Saudi Arabia, because it’s seen as a distinctly Christian holiday, not sanctioned by Islam.  The ban has created a black market there for V-Day shop items, like roses.

The countries that spend the most on Valentine’s Day are China, South Korea, and Singapore.

Sadly, much of the local customs and origins of V-Day are being lost around the world, as the westernized, commercialized version of Valentine’s Day spreads and trumps a lot of the original celebrations.  Still, it’s clear that Valentine’s Day is not just about romantic love.

I definitely think that’s something to celebrate!

Am I talking about Valentine’s Day?  Or Jack Benny’s birthday?  Well, yes, those are just around the corner too.   But what I’m here to relay is information on the second annual Orchid Show at the Chicago Botanic Garden, which runs daily from February 14th through March 15, 10 a.m. to 4 p.m.

If you missed reading my orchid post last year, highlighting some of the interesting sexual propagation strategies of the orchid, click here to read and see pictures, then go to the show and discover more of the interesting orchid patterns yourself.

(Hint):  Guys – taking your lady to see the more than 10,000 orchids at CBG would be a great Valentine’s day outing.  Plus, if you go to the preview opening on the evening of Friday, February 13th, there are also cocktails, hors d’oeuvres, and a jazz ensemble playing.  Each weekend they also have orchids for sale.  Tuesdays and Thursdays at 10 a.m. also feature various music performances.

Hubby and I must have attended last year’s show on one of those special days (just by luck), because I remember being serenaded by a string quartet while we viewed the orchids.

Tickets cost $8 each for members, or $10 for non-members.  Be aware that if you are not a CBG member you will also pay for parking ($25 dollars at the gate or $20 online advance parking, CBG members get free parking).

Here’s the website for more information and to pay your parking online:  http://www.chicagobotanic.org/orchid.

And just to whet your appetite, here are a couple more of the pictures Hubby and I took from last year’s show. 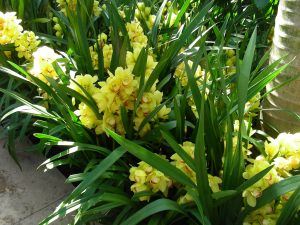 Valentine’s Day has been getting a lot of blog interest this week, much of it sweet and sentimental, but not all of it is happy.  Lot’s of V-Day haters out there, lots of disillusioned couples.  V-Day can be stressful for many, it seems.

One of the blogs I follow is written by a young woman who re-posted some previous V-Day articles she’s written.  The raw emotion of it lead me to read some of her previous posts and, to summarize, her husband had (in not-too-previous times) sent a love note of sorts to his ex-girlfriend through Facebook.  Apparently, no other contact (meaning physical) has come of it and the ex-girlfriend has made it clear she’s no longer interested.  But he got caught (the idiot), by forgetting to sign off his account before leaving his computer.

Well, the good news is, they’ve gotten through the worst of it.  The bad news is, the pain he’s caused his wife is all online, for anyone to read.  Anyone, meaning me, of course.

Reading the bleeding pain of this young woman, and probably being a bit sympathetic to the young man as well (his distressed emotions were also apparent), brought home to me the reality of what it’s like to be married in this day and age of love online.

Kids (please forgive me for sounding old here, by referring to anyone younger than 40 as “kids”), but kids today live in a world that my generation never had to.  They live public.  Their world is broadcast “live”.

Those black words printed on screen or comments on Facebook aren’t necessarily “real” to us oldsters, we don’t automatically think of them as real life.  We know better.  Or, at least, we think we do.  But to the kids, that IS real life, and rightly so that they should feel that way.  Just as we were raised to see things Pre-Facebook, they were raised with their lives public from the very beginning.  Or at least, in this young woman’s case, early enough in their brief time here to have encrusted a solid weight of importance on their shoulders.

What a horrible burden to bear.  For not only are romances begun online, but the whole of their relationship as well.  How many couples meet online?  How many videos are posted of extravagant, or funny weddings?  Morning sickness is tweeted, and marital infidelity is shared among all the victims friends, relatives, and perfect strangers.  Like me.  I’m a perfect stranger.  (Well, not so perfect).

The thing is, it’s not just marriage that is online in this crazed, electronic madness we call social media…. the whole messy divorce happens online as well.

As anyone who’s been married longer than 10 years can tell you,  the reason very old, married couples frequently look like life-long soul mates, isn’t because they’ve had 60 years of wedded bliss.  It’s because they’ve had 60 years!  Those first years of marriage are a bitch for a lot of couples.  The husband (or wife) still having issues with ex’s isn’t something new, and infidelity didn’t originate on Facebook.  Hanky-panky has been around before God wiped out most of mankind with the great flood.  Pretty much no-sooner than there were more than two people on this earth, someone’s eyes started to wander, and gossip became the mainstay of people’s entertainment from the moment it began.  Albeit, the world was a smaller place then (John Henry messing around with the mayor’s daughter had a smaller audience), but the problems existed even then.

Choosing to live with one man/woman for the rest of your life is a hard thing to do!  That’s why doing it (over and over for 60 years) is how you get better at it.  You get to a point where you learn to adjust to each other, ride the bumps, and hold on for dear life through the darkness.  Depend on each other.  Developing trust.

Some people call this “settling”.  They are wrong.  There is no deeper love than the one that develops though tolerance, and need, and forgiveness.  Through life.

In the case of my young couple, as I write this, the wife has developed some health issues (also online) which seems to have drawn her and her husband closer.  They have been married for only a few years.  They have many, many hills and valley’s ahead of them, but I have hope.  From what I’ve read so far, they’re committed to making it work.  They’ve put their commitment to each other ahead of their wounds, wondering if the band aid of dedication will be able to heal their pierced bond.

I think they can do it.  Certainly it seems that I’ll be able to find out, simply by signing in to my computer.  I thank God that my marriage began in a smaller world.

To this couple I say:  Hang in there.  Keep fighting for love.  And when those dark, scary nights envelop you, and the fear of not making it looms in your mind, remember that old cliché about how it’s always darkest before the dawn?  That’s not just a cliché.  That’s a promise from God.

Weeping may endure for a night, but joy comes with the morning. (Psalm 30:5)

In the morning, O Lord, you hear my voice; in the morning I lay my requests before you and wait in expectation.  (Psalm 5:3)