Who Is The Kumquat Thief?

The bitter cold and weak light of an Illinois winter make growing a kumquat tree outdoors an impossibility.  Indoors, it’s not easy either.  Especially if there’s a thief in your house.

If you’ve ever tasted a kumquat, you’d know why I grew one.

I fell in love with the fruit when I traveled to Florida one year, and a relative of mine picked one off the kumquat tree he had growing in his yard.  He handed it to me and instructed “eat the whole fruit, skin and all.”

It was instant love at first bite.  Unfortunately, despite the wonderful sweet/sour taste of the fresh fruit, there’s not a lot of kumquat shipping going on.

I don’t get it.  You can buy Florida oranges, Texas grapefruit, Costa Rican pineapples, Honduran bananas, kiwis from New Zealand, and Mexican avocados.  But try and find kumquats at your local grocer.  It’s a rare day in January when you’ll find one.

So it came about that one year I bought a kumquat tree from a nursery that assured me the citrus was hardier than most and could be grown successfully indoors in my zone 5 habitat.

For three years I nursed that tree.  It wasn’t easy.

Our summer takes too long to get hot, and turns cold too quickly.  Normally flowering in spring, forming fruit in summer, and ripening in early winter… my kumquat barely had time to set flower outdoors before it was time for me to carry it back inside.

All those websites and catalogs that tell you it’s easy to grow kumquats inside in the frozen north are either 1) unintentionally ignorant, or 2) flat out lying so you’ll buy a tree from them.

Kumquats need heat for the fruit to ripen.  Try getting heat next to a sunny window when it’s 10 degrees below zero outside.  Speaking of that sunny window… kumquats need light.  Warm, bright light.  My winter light shining in a full sun window is still too weak. 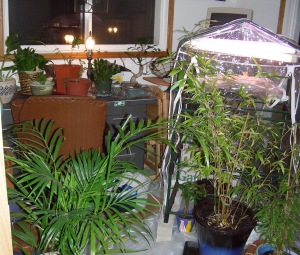 Not to be daunted, I re-arranged my office, the brightest room in my house.  I turned the whole room into a mini-greenhouse and set the kumquat as close to the window as possible, catching what little sun rays it could.

I adorned my office with artificial light.

To protect it from the cold near the window, I enclosed the whole shelving unit in plastic sheeting.  Of course, dry heat from a furnace comes nowhere near the humidity needs of tropical fruit, so I had to set up a humidifier within my tiny office as well.  And, what the heck, I added a bunch of my other house plants to the locale, which not only helped them, but also created additional humidity for my kumquat.

You couldn’t come into the room without skirting the equipment and plants.  As my office faces the street, the lights from my windows lit up the whole block.  My neighbors commented that they didn’t need to turn on their porch lights anymore.  The light leaked into their homes in the evenings.  Did it lower their electric bill?  I wonder.

I had a trick-or-treater ask why I had a bright “jungle” on the side of my house and I suspect we were the subject of many Halloween stories… at least by the parents.

I’m not even going to begin to tell you how much this all cost.

Finally, after several years of this insane behavior, I found – to my delight – that my kumquat held twelve little orange globes.  I was thrilled.  A dozen kumquats isn’t much (they are a bit larger in size than a grape).  Those twelve kumquats would’ve been just one or two snacks, actually.  But did I care?  No!  I was one happy gardener.

Patiently, I waited for the fruits to ripen.  Every few days I would check on them, smacking my lips in anticipation.

Then one day, I noticed something funny.  Something had changed.  I counted the fruits, and two of them were missing. 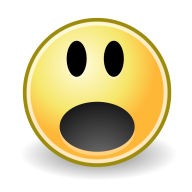 “Two of my kumquats are missing,” I said to Hubby.  “Did you eat them?”  There was an accusatory tone in my voice.

Hubby denied responsibility.  I could only assume that I had counted wrong.  After that, though, I kept closer watch.  The next week passed and all seemed fine.  I began to relax again.

Then, inexplicably, another one disappeared.

I confronted Hubby.  “There are only nine kumquats on my tree,” I said.  I didn’t need to say more, my combative stance and expression said it all.

Alarm lit up his face.  He lifted his palms, facing me, signaling me to stop, and swore up and down that he had nothing to do with it.  I had no proof and it seemed out of character for him to steal my fruits, but I couldn’t see how else it had happened.  Sylvester, our dog, didn’t like going into the office because of the crowded set-up and humidifier.  Plus, he’s a dog…  kumquats (especially unripe ones) are kind of sour.  He liked to have a bite of banana whenever we did, but he was really a meat and potatoes sort of a guy.

After that, I became obsessed with counting the kumquats every day.  Every so often another one would mysteriously disappear, so I began to watch the office door like a hawk, but I never caught anyone doing the deed.

Then, one day, I caught him.

He thought I wouldn’t see him, engrossed as I was in my book.  He passed the outskirts of the hall silently, moving covertly and sticking close to the wall, hanging his head low so I wouldn’t notice him out of the corner of my eye.

He slipped into the office and disappeared from view.

I popped up from my chair and ran to the office, just in time to catch him with a kumquat on his treacherous lips.

“Wait!” I cried.  His eyes grew wide and he ran past me and took off for the other side of the house, where I found him hiding behind the bed.

But as much as I loved my kumquat tree, I love my dog more.  And how could I blame him?  Kumquats are the most glorious fruit, and I suspect he knew he’d never get any offered to him.  So I forgave Sylvester his trespasses.

That night, when Hubby came home, I told him what had happened.  Of course he took Sylvester’s side, as I knew (and Sylvester knew) that he would.

Sylvester watched as I set up a barricade to the office, protecting the remaining five kumquats.  When they finally ripened, I gave Hubby two and I ate the remaining three.

Sylvester watched us eat them, longing shining from his big, brown eyes.  I almost relented and gave him one, but then I didn’t.  Hubby gave one of his to Sylvester, and the kumquat story has come to epitomize some of the craziness I sometimes go through for plants.  We talk about it with humor.

Oh, the tree?  Despite all the artificial light, summer wasn’t enough to repair the damage caused by yet another winter indoors – It died the following year.  The neighbors were thrilled – no doubt Sylvester was disappointed.

I’m lovin’ this winter.  I’ve been hearing lots of discontent from family and friends, about the record number of below zero temps and snow.  And yeah, I admit it’s gotten to be a bit much at times.

I’m tired of changing the towel that’s shoved into the grooves of my bedroom window, to catch the water leakage from the ice dam on the roof.  I look out that window and I can see the snow is now halfway up the side of that wall.  There’s a huge mass of icicles hanging from my one-story roof, reaching down and meeting the snow, the tips disappearing into the white ground.

And okay, neither am I thrilled with the below zero nights.  Especially when the negatives dip into double digits.  I’m tired of gating off opened cabinets to keep the pipes from freezing, or worrying about my shift-worker husband driving home on deserted roads at midnight.

Even the dog is driving me crazy. He runs into my office periodically and gives me wide, demented, cabin fever stares… right before he gets into some trouble.  (Poor baby).

I’m not even happy with the way our village ran out of road salt, much as many other communities have, and told us they couldn’t get sand so we would be driving on snow packed roads from now on.  Their sage advice was to avoid the hills.  Since my community is nothing but hills, I could only laugh at that advice.  I know the village is swamped with complaints, bless their frozen hearts, and I really do appreciate their efforts.  I am not one of the complainers.  But I do think that when they threatened us with liability for accidents in front of our house if we blew our snow into the road, perhaps they were over-reacting to criticism.

Yet, this morning, while I was out snow blowing the latest 6 inches of white, trying to widen the driveway (which is becomingly alarmingly narrow), and dislodging today’s chewed newspaper from the blades of the snow blower… I had to admit that I still wasn’t done with this winter.

I shoveled the snow from in front of the mailbox so the mailman could deliver my junk mail, went in and got the dog, and watched him struggle valiantly through the drifts to mark his favorite pine tree.  Then we just walked around a bit, enjoying the brilliant winter day.

Don’t get me wrong…. I love the other seasons.  How could I not?  When everything bursts with life?  I love gardening and summer flowers and the colors in fall.  But winter has always been my favorite season.

I love discerning the patterns of growth in the bare trees, designs you can’t glimpse when they’re fully clothed in leaves.

The stark browns and grays that spring like charcoal drawings from a blinding white landscape.  And the way the snow coats the railings of the fence, or lays like vanilla frosting on top of giant evergreen pines.

Of all the seasons, winter always makes me think of God the most.  Certainly I pray more during winter!  For safety on the ice and the hope the furnace doesn’t die.  But it’s more than that.  The tilt and orbit of the Earth around the Sun, the never ending pattern of light and dark…. this is what makes our seasons, and all seasons are from God.  We could not exist without them.

The bible tells us that after the great flood, God promised Noah cycles of seedtime and harvest, cold and heat, summer and winter, day and night, without end, as long as the earth existed, (Genesis 8:22).  From the breath of God ice is made, He balances nature, and does wondrous things, (Job 37).  He gives snow like wool, (Psalm 147:16).

So call me crazy, but I think I have good cause not to join the voice of the dissenters.  You can bet I’ll be right there with you come spring, delighting over early crocus and that first lime green flush of new grass.  But until then?  I’m still lovin’ this winter!

Science Fiction and Other Suspect Ruminations